3 Women Leaders Guaranteed to Inspire You

No matter where you are on your journey to success and fulfillment, one thing is certain: we all need a little boost of inspiration from time to time. That’s why I’m sharing the stories of three powerful women leaders to help you stay focused and motivated to reach your own vision of success.

With an estimated net worth exceeding $1 billion, Sheryl Sandberg, Facebook COO and “Lean In” author, was named in 2012 on Time’s annual list of the 100 most influential people in the world. Her book, “Lean In: Women, Work, and the Will to Lead”, sold over one million copies by the fall of 2013 and has soared to the top of the bestseller lists since its launch.

Like any BOLD leader, Sandberg has faced criticism along the way, with one critic even suggesting she is “tone-deaf” to the struggles faced by average working women. But she addressed naysayers in her book when she said that she was “acutely aware” of the struggles women face and that she wanted to offer advice that “would have been useful long before I had heard of Google or Facebook”.

Sandberg married her second husband, Dave Goldberg, in 2004, and eventually had a son and a daughter. The couple often discussed being in a Shared Earning/Shared Parenting Marriage. Tragically, Goldberg passed away suddenly in May 2015 when the couple was on vacation.

Inspirational Quote: (In a Facebook post following the loss of her husband) “I think when tragedy occurs, it presents a choice. You can give in to the void, the emptiness that fills your heart…Or you can try to find meaning…When I can, I want to choose life and meaning.” 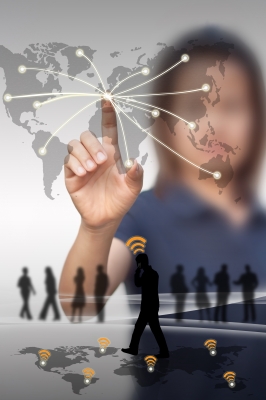 Get In a Bit Over Your Head

Marissa Mayer, Yahoo CEO and #36 on the Forbes list of America’s Self-Made Women (2015), is one of the highest-paid CEOs in the US. Born in 1975 in Wausau, Wisconsin, Mayer would eventually graduate from Stanford with an MS in Computer Science in 1999.

Mayer boasts brains and beauty…By 2009, the Illinois Institute of Technology granted Mayer an Honoris Causa Doctorate Degree in recognition of her work in the field of research. That same year, she was named by Glamour Magazine as one of the Women of the Year. Then in 2013, Mayer became the first CEO of a Fortune 500 company to be featured in a Vogue magazine spread!

But it was in 2012 when Mayer was appointed President and CEO of Yahoo! that she became widely recognized outside of the tech industry. She oversaw a major personnel policy change there that required all remote-working employees to convert to in-office roles.

Mayer has shown the world again and again that women can achieve some pretty remarkable goals – no matter what their age!

Inspirational Quote: “Get in a bit over your head. That’s how you grow and learn and stretch yourself.”

Chancellor of Germany Angela Merkel has always been “a bit awkward” according to photographer Herlinde Koelbl, who has been photographing her since 1991. But, asserts Koelbl, her strength was perceptible from the very beginning.

One of Merkel’s biographers refers to her as “the Chancellor of Europe”, given that Germany is enjoying low unemployment and a resilient manufacturing base. A continuing monetary crisis of the euro zone has transformed Germany – Europe’s largest creditor nation – into a “regional superpower”.

When trying to explain her extraordinary success, many look everywhere – but to Merkel herself. Divorced and remarried with no kids, Merkel is a product of East Germany, and while she may not have the “typical qualities” of a politician, she has “made older and more powerful politicians, almost all of them men, pay a high price for underestimating her”, according to The New Yorker author George Packer in his article The Quiet German.

Inspirational Quote: “When it comes to human dignity, we cannot make compromises.”

These powerful women are from very different walks of life, but they have at least one thing in common – they’re willing to make BOLD moves.

If you need a short burst of inspiration, you don’t want to miss out on my BOLD Move of the Week. You’ll get simple tips you can implement right away that will help you to step out of your comfort zone and become more of the woman you’re destined to be! Just click here to get instant access.