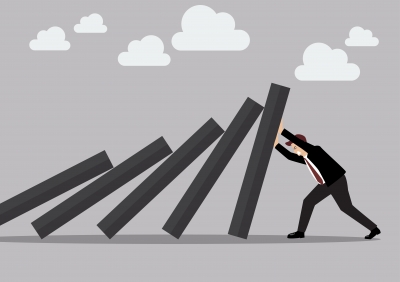 In your personal life and in your business world, it’s not always smooth sailing.

Yet, learning from challenges provides vital knowledge and experience for handling the next setback that’s inevitably going to come along.   The way you react to a challenge can set the stage for success or failure.

And resilience can bring rewarding results.

Gill Corkindale writes in the Harvard Business Review about the incredible power gleaned from resiliency. At a conference he was coaching for international leaders, he learned the story of Atef, now a senior VP at a bank in the United States.

Atef grew up in the West Bank, a region of strife. He had no formal education. When Atef was 15, his father died, leaving him to provide for his family. From waiting on tables to driving taxi, Atef saved enough to educate himself and earned a scholarship to a school in the United States. He took a low paying job at a bank, worked his way up and was rewarded with a promotion at the age of 35. Sponsored by the bank, Atef earned his MBA at a premier business school.

Atef stated that facing – and overcoming – all the adversity in his early life shaped him. Whatever challenges faced him, he became determined to overcome them. That steadfastness has given him a discipline of balance and assuredness.

Atef’s story showcases how dealing positively and successfully with life’s problems as they come along go a long way in building resiliency. Yet something has happened to resiliency in today’s youth.

In Psychology Today, Peter Gray discusses how colleges are dealing with well, a rather wimpy attitude among students over common, everyday events. He cites an example of two students who called the police – and later sought counseling – when they discovered a mouse in their apartment. He notes students are regularly seeking help for everyday problems in life, from receiving a low grade on a paper to being name called.

Facing problems – not shrinking from them – breeds resiliency. It’s a basic concept in life that needs to be focused on, not tip-toed around.

Becoming a successful leader means overcoming challenges and discovering innovative ways to tackle problems. If fear enters the mindset, it can paralyze our progress.

In Forbes, Megan Biro lists ways to be a more resilient leader. She cautions leaders to become aware that when things go wrong, it’s not all about you. Many factors can play into poor performance. Don’t be Atlas and attempt to carry the world on your shoulders – you can only do so much. And of course, positive thinking is a must, along with relationship building.

As a leader, you’ve faced obstacles to get where you are today. Share your experiences below and inspire others to see how your resiliency led you to your success!

“The oak fought the wind and was broken, the willow bent when it must and survived.”

Want a quick weekly burst of inspiration that will inspire you to challenge yourself, gain a new perspective, and have some fun in the process? Don’t miss out on my BOLD Move of the Week.  Click here to get instant access.