Staying True to Your Values is Easy Until…

Staying true to your core values can be effortless when life is a smooth sail.

But what happens when the waters get rough? Do you flounder and sink?

Or do you take a deep breath – and swim forward?

“Core values serve as a lighthouse when the fog of life seems to leave you wandering in circles;

to clearly be the better choice.”
-J. Loren Norris

What Is Values-Based Leadership?

Values-based leadership is leading while remaining true to one’s values – not wavering or being swayed by circumstance or opinion. A leader can modify strategy or approaches to a problem, but never alters his or her core beliefs and principles.

As Harry M. Jansen Kraemer Jr. writes in Forbes, staying committed to your values is easy when things are going smoothly, but when what he calls the 3 C’s occur – change, controversy, and crises – a leader must clarify and corroborate his leadership values. That’s a lot of C’s!

“In a trying time, the actions and reactions of a leader reveal his or her personal and organizational values to the world. That is when you must rely on the four principles of values-based leadership to help you see clearly as you chart the course forward,” asserts Kraemer.

Those four principles are: 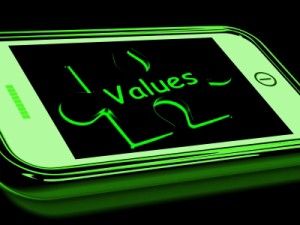 As Kraemer notes, change, controversy and crises are certain to occur, but relying on the four principles will glean a fourth ‘c’ – courage.

Retired President and CEO of Proctor and Gamble Bob McDonald shared his own list of character traits of a values-based leader in a 2009 appearance at the Kellogg School of Management – a list he culled in his two-decade career. Topping his list:

Lead a life guided by purpose. – “Only work for a company you believe in,” said McDonald.

He also cites character as the paramount trait of a leader, noting the importance of integrity and the ability to acknowledge mistakes. Inspiring employees with the atmosphere of success is crucial, noted McDonald, explaining that success is contagious.

The Saylor Foundation names self-reflection as a key characteristic of a values-based leader, noting it enhances a person’s understanding of herself. Other key traits are:

Unlike many common so-called leaders, a values-based leader is selfless, guided into action by the needs of others, instead of a lust for power, fame or money.

An Authentic Leader Shares His Story

While we oftentimes read of a leader’s business expertise and background, their personal achievements go untold. Tony Clement, Vice President, analytics, at Big Spaceship, shared his story in Forbes, explaining how his Navy SEAL Training educated him on being a better leader.

Clements took part in Kokoro Training, a 50-hour physical challenge which replicates the Navy SEAL’s Hell Week. In his first attempt at the course, Clement fell short. In 30 non-stop hours in grueling 105 degree heat, he pushed himself, but explained he did not have the mental resolve to complete the event.

Eight weeks later he returned, noting that facing his fears would be an opportunity to learn through humility, a lesson learned in the SEALs. “After 50 more hours of hell, I made it,” he said. He came away with key principles.

One that stands out: It’s never, ever about you.

Clement says when you’re hurting, find someone who is feeling worse than you – and do something for them. It helps them get through their ordeal – and it takes your own mind off your pain…a win-win situation.

As Clement so accurately states: true leaders never question the end zone. It’s never a matter of if. It’s just a question of how.

Get weekly inspiration to help you stay in alignment with your values with my BOLD Move of the Week! You’ll get new perspectives that will stretch and challenge you to grow – and best of all, it’s completely free! Sign up here to get instant access.